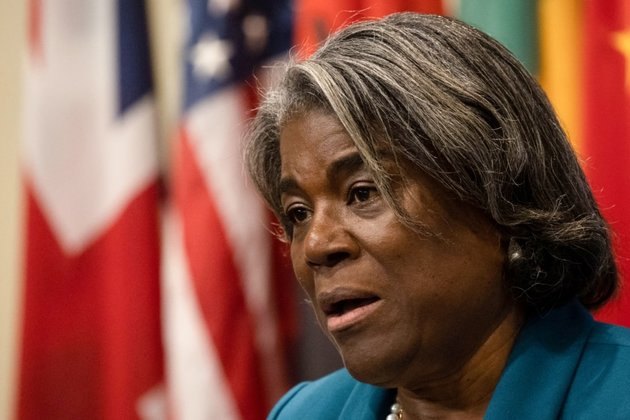 Thomas-Greenfield's trip is happening in tandem with Treasury Secretary Janet Yellen's ongoing mission to Senegal, Zambia and South Africa that will continue through January 28. Yellen is seeking to deepen U.S.-Africa economic ties, including by expanding trade and investment flows.

President Joe Biden announced over $15 billion in two-way trade and investment commitments, deals and partnerships at the three-day December summit that drew delegations from 49 African nations to Washington.

Africa has deeply felt the impact of Russia's invasion of Ukraine as fuel, food and fertilizer prices rose in its aftermath. This year, U.N. agencies have warned that the impact of the fertilizer crunch could reduce the size of harvests on the continent.

The U.N. and Turkish-brokered Black Sea Grain Initiative has seen more than 18 million metric tons of Ukrainian wheat and other food stuffs exported to international markets since it was signed in mid-July.

The Joint Coordination Center that oversees the deal says nearly 44% of the wheat exported has been shipped to low and lower middle-income countries. The U.N. is also working with Russia to remove remaining impediments to exporting its food and fertilizer products.

But the U.S. blames Russia for impeding the export of Ukrainian grain, saying it is not at the level it should be.

"Russia has deliberately slowed down inspections of these ships and essentially throttled the operation of this corridor," the senior administration official said of the ships sailing in the Black Sea. "That is having an impact obviously not just on Ukraine but for the entire world."

As of Sunday, the Joint Coordination Center said 35 ships are awaiting inspection. Five of them are waiting to enter Ukrainian ports and 30 are loaded with cargo waiting to leave for their destinations.

International support has been strong for Ukraine at the U.N. General Assembly, but African nations have repeatedly abstained on resolutions that might upset Russia.

Thomas-Greenfield, who previously served as a U.S. ambassador to Liberia and Assistant Secretary of State for African Affairs, is making her third trip to the continent since becoming U.N. ambassador in February 2021.

During her trip, she will be visiting two current Security Council members - Ghana and Mozambique - offering the opportunity to address the issue of reforming the U.N. Security Council.

For decades, countries have said the 15-nation body needs to be expanded to reflect current realities, not those of a post-World War II world.

In September, Biden said the United States supports increasing the number of permanent seats on the council, including one for Africa. There are currently five seats - Britain, China, France, Russia and the U.S.