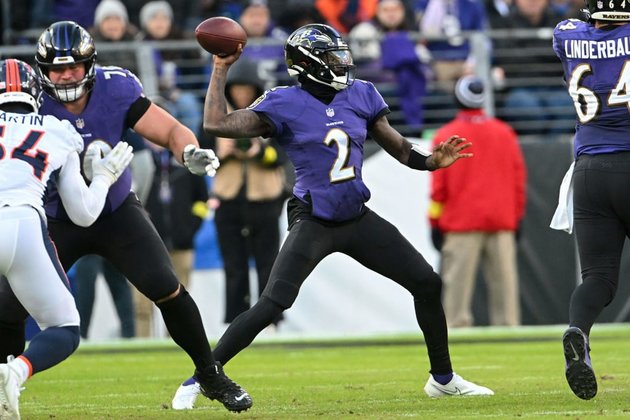 With Lamar Jackson on the shelf Sunday against the Denver Broncos, and for an undetermined amount of time moving forward, due to a knee injury, Tyler Huntley stepped in and played well.

Huntley completed 27 of 32 passes for 187 yards. It wasn't big chunk plays, but Huntley was efficient, took what the Broncos defense gave him, and put the ball in his receivers' hands to allow them to pick up yards after catch. Huntley kept the Ravens offense moving, and ultimately scored the game's only touchdown.

Here's a closer look at Huntley's day, picking up at the start of the second quarter:

Huntley doesn't get many first-team reps these days with Jackson as the starter, so it was impressive to see him step in with hardly any time to even warm up, and have instant chemistry with the starting wide receivers.

Huntley wasn't perfect on the day, and sometimes his quick release for shorter gains means missed opportunities down the field. It's a trade-off. Here, pressure also impacted a quick throw over the middle, but with a little more time, Huntley had an open touchdown to DeSean Jackson.

Broncos and Ravens players all talk about how similar Jackson and Huntley play, and their ability to extend plays when needed and find a target is one of their greatest attributes. Here, Huntley and Andrews show their chemistry with Andrews creating a throwing window for his scrambling quarterback.

Huntley showed good timing with his throws throughout the game. This kind of back shoulder throw is tough to defend.

Huntley led the Ravens with 41 rushing yards, a mixture of designed runs like Jackson gets, and scrambles like this.

Huntley's receivers did a good job throughout the game of making defenders miss and picking up extra yards. When the ball is out quick and the coverage is playing off, that's a critical element to keeping the chains moving. Rookie tight end Isaiah Likely had two such plays on the Ravens' game-winning drive.

When Baltimore reached the red zone, it had to score a touchdown to win. The Broncos tried to get a game-sealing interception, but Huntley pulled it down and made his best throw of the day to Kenyan Drake to put the Ravens at the 2-yard line.

Once again, the Ravens trusted Huntley with the ball (and game) in his hands, and his blockers paved the way for the game-winning touchdown plunge.