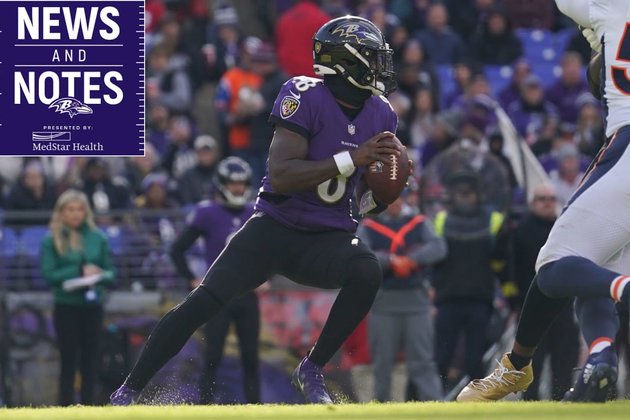 Lamar Jackson's status is 'week to week' after an MRI was performed on his injured knee, Head Coach John Harbaugh said Monday.

Jackson was injured on the final play of the first quarter and did not return to Baltimore's 10-9 victory over the Broncos. Harbaugh did not rule out Jackson playing Week 14 against the Steelers, but called a scenario in which Jackson returned that quickly "less likely."

"I would say it's kind of week to week," Harbaugh said. "As the week goes on, we'll see for this week. Probably less likely for this week, but it's not impossible. After that, it'll become more and more likely."

Jackson has not missed an entire game this season, but after he could not return to Sunday's game, backup quarterback Tyler Huntley played effectively (27 for 32, 187 yards, 41 yards rushing, one interception) and led the Ravens on a 91-yard touchdown drive on their final possession to win the game. Huntley capped the drive with a two-yard run for the game's only touchdown.

Huntley started against the Steelers in the regular season finale last year, going 16 for 31 for 141 yards, while rushing for 72 yards on 12 carries. He also threw two interceptions during a 16-13 overtime loss that was the final game of former Steelers quarterback Ben Roethlisberger's career.

The Ravens do not have to change their game plan dramatically based on whether Jackson or Huntley plays against the Steelers.

"Both quarterbacks play a similar game, we run the same basic offense for both players," Harbaugh said. "He's (Huntley) a player who has a lot of dynamics to his game. He can throw, he can run, he operates really well. If that's the way it goes, that's the way it goes. He'll be excited to play and our guys will be fired up."

"We've got Anthony Brown - he's been with us all the time - so I'm very comfortable with our backup situation, in terms of depth behind Lamar and Tyler," Harbaugh said.

In other moves, the Ravens released wide receiver Binjimen Victor from the active roster and released linebacker Devon Kennard from the practice squad.

Harbaugh on James Proche's Pass That Was Intercepted: 'It Was Just a Bad Play'

The Ravens overcame setbacks to win Sunday, including a gadget play that backfired early in the fourth quarter. Wide receiver James Proche got the ball on a double reverse, then threw a pass intended for Kenyan Drake who was surrounded by Denver defenders in the end zone. Justin Simmons intercepted the pass to end a Baltimore scoring threat.

The Ravens were already in field goal range and trailed, 9-3, at the time.

"Everything broke down; it was just a bad play I'd say," Harbaugh said. "It's one we'd probably want back. It just wasn't a good time for it. It seemed like a good idea I guess at the time in some ways; there were reasons for that, but in hindsight [it was] just not a good call. Trying too hard maybe to make something happen with a trick play. Really at that time in the game, it was probably time just to grind. I think it turned out to be a grind game, and that was a finesse idea that it wasn't time for that, for sure."

Harbaugh said he was hopeful All-Pro left tackle Ronnie Stanley (ankle) would be in action against the Steelers after missing the last two games.

"We'll just see how it goes. I'm very hopeful for that, for sure," Harbaugh said.

Harbaugh did not give a timetable for inside linebacker Patrick Queen (thigh bruise) who was carted off in the fourth quarter, but reiterated that Queen's injury could have been far more serious.

"We came out of that one really happy about that," Harbaugh said. "I was out there [when Patrick Queen got injured], and he was saying, 'Don't bring that cart out.' He was hurting though; those bruises can really hurt. Some of us will bang something on a table and we can't take it. That play was like a car wreck right there; there were four guys that came together there [and] smashed into each other. He's going to be OK."