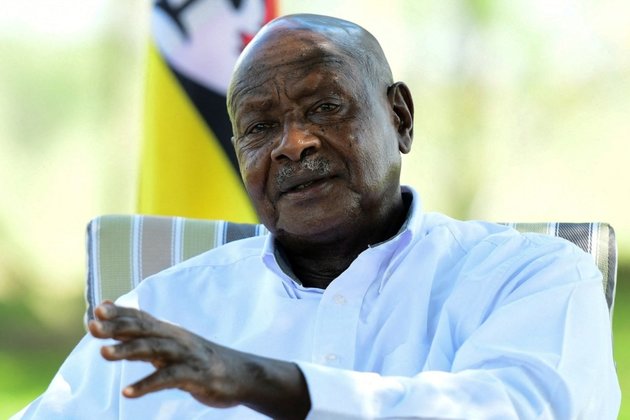 Kampala, Uganda - Ugandan President Yoweri Museveni has issued a public apology to Kenya, asking forgiveness for tweets by his son, Muhoozi Kainerugaba. The tweets on Monday joked about Uganda invading Kenya. But Museveni promoted his son from lieutenant to general while removing him as commander of the army's land forces, saying there were many positive contributions he has made.

In a statement Wednesday, Ugandan President Yoweri Museveni apologized for what he called meddling in the affairs of brother Kenya.

The statement reads in part, "I ask our Kenyan brothers and sisters to forgive us for tweets sent by General Muhoozi, former commander of land forces here, regarding the election matters in that great country."

Museveni said it is not right for public officers, be they civilian or military, to comment or interfere in any way in the internal affairs of brother countries. He said such discussions should be handled by the peer-review mechanism of the African Union and not in public comments.

On Monday, Kainerugaba joked on Twitter about Uganda invading Kenya. One tweet said, 'It wouldn't take us, my army and me, 2 weeks to capture Nairobi.' This was quickly followed with, "Haha, I love my Kenyan relatives, Constitution? Rule of Law? You must be joking! For us there is only the revolution, and you will soon learn about it."

The Ministry of Foreign Affairs responded Tuesday with a statement reiterating its commitment to good neighborliness, peaceful coexistence and cooperation with Kenya.

In May, Gawaya Tegule, a lawyer, filed a constitutional court petition challenging Kainerugaba regarding his politicized social media tweets. Tegule asked the court to charge Kainerugaba with treason and said the first son's tweets on regional affairs are hard to fathom.

Museveni explained that while Kainerugaba's mistake is one aspect where his son has acted negatively as a public officer, he has many other positive contributions.

However, Kristof Titeca, a professor at the University of Antwerp on governance and conflict in Central Africa, argued that Kainerugaba's promotion to the rank of general could be seen coming.

He cited instances early this year when the army was put on high alert, and Museveni held a meeting with the top army brass.

Later in July, the army distanced itself from tweets by Kainerugaba that supported the Tigray People's Liberation Front in Ethiopia, saying the tweets were not an official position of the Uganda People's Defense Forces.

Titeca said Kainerugaba's promotion to general raises questions about what his father, Museveni, could potentially be preparing him for outside of the military.

"Does it mean more power or less power for the first son? As commander of the land forces, he did, in fact, hold a lot of actual military power," Titeca said. "Is it a move by his father, the president, to take him away from that military power? Or is it a way to transition him to more civilian responsibilities and hence prepare him for a presidential bid?"

Kainerugaba, at the age of 48, is now the youngest general in Uganda. Most of those who are ranked as generals fought with Museveni in the 1986 bush war that brought him to power.

Calls to Kainerugaba and his personal assistant went unanswered. But as relates to Kenya, Kainerugaba indicated in one of his tweets that he had met with his father, and he indicated some changes would be coming after he scared Kenyans on Twitter.

National Unity Platform leader Robert Kyagulanyi responded to Museveni's apology by demanding he apologize to what he called countless Ugandans abducted and tortured with reckless abandon, and he questioned whether they would ever get justice.