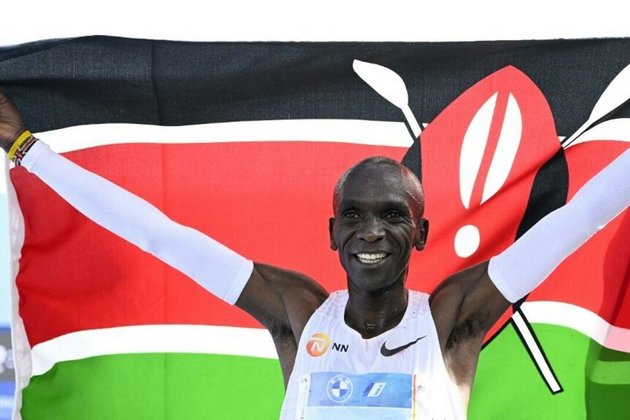 Olympic champion Eliud Kipchoge has won the Berlin Marathon, shattering his own world record set in the German capital four years ago.

Kenyan Mark Korir finished second behind his countryman with a time of 2:05:58, while Ethiopian Tadu Abate came third with 2:06:28.

Ethiopian Andamlak Belihu, who kept up with Kipchoge for around two thirds of the race, held on for fourth.

On Friday, Kipchoge said his only goal was "to run a good race", but he was clearly aiming not only for a world record but to beat the two-hour mark.

A pod of around seven runners kept up with the champion for the first 10 kilometres, before 2021 winner Guye Adola and Belihiu pulled away after 15 kilometres.

Adola was unable to maintain the pace and began to fall back after 18 kilometres, with both Kipchoge and Belihu reaching the half marathon mark in less than an hour.

Kipchoge emerged on his own after 25 kilometres and was still on pace for the under two-hour mark, but began to slow slightly despite still keeping the world record in his sights.

He became only the second man to win four Berlin Marathons, joining Ethiopian Haile Gebrselassie who owned the event from 2006 to 2009.

He has now won 15 of his 17 career marathons, including two Olympic triumphs and 10 major titles.