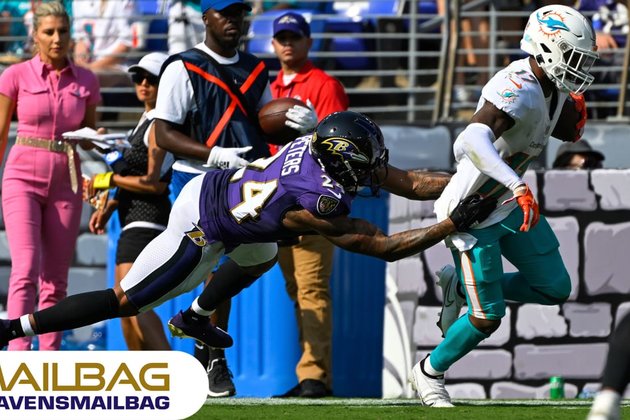 Mailbag: Is the Ravens Secondary in Trouble

Mink: After all the offseason additions to the secondary and talk of it being arguably the best unit in the league, nobody expected Baltimore to be sitting at last in the league in total defense and pass defense after two weeks. But here we are after Tua Tagovailoa (with Tyreek Hill and Jaylen Waddle) hung 469 yards on the Ravens defense.

Now, will the Ravens defense finish at No. 32 in the NFL this year? No, I absolutely don't think so. I think the Miami game, when we look back on it, will be an anomoly. Marlon Humphrey was dealing with a groin issue, Marcus Peters was limited in his first game back and Kyle Hamilton and Jalyn Armour-Davis had rookie mistakes in their second NFL games. Plus, Tua got red hot and Hill/Waddle is one of the best wide receiver duos in the league.

Marcus Williams is a certified baller, evidenced by his three interceptions in two games. Humphrey, and the secondary as a whole, played well when he was on the field. We don't know how long his groin ailment will linger, but he has more time to recover than last week.

Peters will get stronger as he knocks off more rust. The Ravens' rookies will get better with more reps. That Miami game will stick with them, and they'll learn and grow from it. Plus, we'll see if Brandon Stephens gets back on the field this week. That would help too.

You can never predict injuries. But even if another corner were to go down (knock on wood that doesn't happen), I still think the Ravens are deeper at cornerback than last year and have better safeties. The secondary had a rough day, but I still think the talent is there to be a strong unit and there's good reason to believe it will get better.

Mink: I'll take this one too, since we're sticking on the secondary. The second, game-tying touchdown to Hill was a shocker. How does Hill get that wide open? This was just a blown assignment that, if executed properly, should have turned out much differently. The Ravens dropped Pepe Williams into the deep zone on the right side and Peters was in the shallow zone. Armour-Davis seemed to think he was also in the shallow zone on the other side, so he stayed while Hill ran past him. Head Coach John Harbaugh said somebody was supposed to be in that deep zone. It's unclear whether that was supposed to be Armour-Davis with somebody falling underneath him or whether Kyle Hamilton, who was near the line of scrimmage, was lined up in the wrong spot or just didn't retreat fast enough.

The play call there was to simulate pressure while still retreating to a deep zone, in order to scheme up some pressure on the other side. Simulated pressure can work out just fine, even in that situation, so long as everyone gets to their coverage areas. The Cover Zero look created a one-on-one pass rush opportunity for Calais Campbell that he won easily against left guard Liam Eichenberg and almost took down Tua. But Hill breaking wide open so quickly, Tua didn't have to hesitate to launch the pass and Campbell's rush was a hair late. In a game where the pass rush only got one sack, this was a real opportunity to sink a dagger in a critical time, but an instance of the coverage not helping the rush.

Downing:There's no doubt that the absence of J.K. Dobbins and Gus Edwards has impacted the running game. Dobbins has star potential and he could put up big numbers when he gets back on the field, but his absence has been felt since he suffered that knee injury last number. Having dynamic running backs is certainly a major aspect of a strong ground game, and the Ravens have yet to get their top backs on the field. It seemed like Dobbins was in line to play last week when he met with the media on Friday, but the Ravens are still being cautious in his recovery. We'll see if he's ready to make his debut Sunday in New England. Edwards is still on the physically unable to perform list, so his return is still a little ways off at this point.

But the issues with the running game aren't soley on the backs. There were plenty of times, especially in short yardage situations, that the backs had no room to work. The offensive line has to do a better job of getting a push off the line of scrimmage to give Kenyan Drake, Mike Davis and Justice Hill some space to get to the second level. The running game is a complicated puzzle where everything has to work together - the line, the backs, the quarterback reads - and the Ravens are having too many different breakdowns in that process. They have to improve in multiple areas, and getting Dobbins back on the field will help that equation.

Downing:The Ravens gave Ben Cleveland the opportunity to prove himself in training camp, but Ben Powers simply won the left guard job. Cleveland missed time early in camp when he failed the conditioning test and couldn't get on the field during the first week of practice. He then had to make up ground in the competition for a starting job and simply didn't do it. The Ravens have high hopes for Cleveland, and that's why they used a third-round pick on him last year. But he's struggled to stay on the field because of injuries last year and then the conditioning issue this season. He still could find his way into the lineup if the Ravens have injuries on the offensive line, or if they aren't able to improve the rushing attack with the current group. Cleveland has potential, but Powers is simply ahead of him on the depth chart right now.