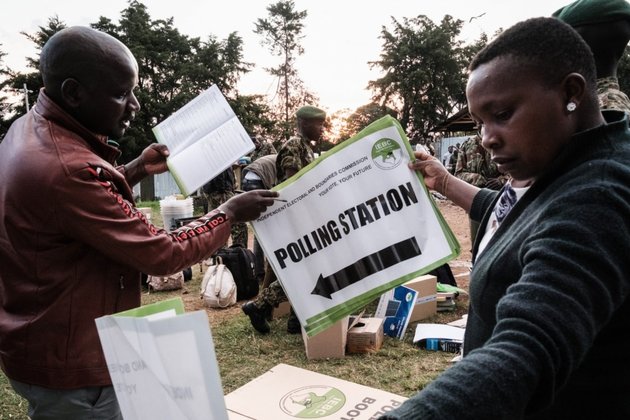 Nairobi - Kenyans head to the polls Tuesday, and the country will rely heavily on technology to verify voter identity and transmit presidential vote results. The electoral body is at the center of the public's attention as it tries to clean its image after the Supreme Court's nullification of the 2017 presidential election due to irregularities.

Kenya's electoral commission said it's set for the general election, with election materials arriving at more than 46,000 polling stations across the country.

Boya Molu, one of the commissioners of the Independent Electoral and Boundaries Commission (IEBC), said his team is ready to conduct the election.

'All of our people have been trained. They are properly informed from technology to identification of voters through technology to election laws. ... Its systems are set. We are just ready to take off on Tuesday at 6 a.m.,' he said. 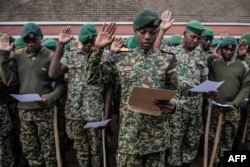 National Youth Service (NYS) personnel take an oath as they gather before escorting the electoral material at the county hall in Eldort on Aug. 8, 2022, ahead of Kenya's general election.

On Sunday, the commission fired four election officers for allegedly meeting a candidate to help rig the vote in western Kenya.

The electoral body was heavily criticized for mismanaging the 2017 presidential vote. Kenya's Supreme Court nullified that election, saying the electoral process and the constitution were not followed in conducting the poll.

Joy Mdivo, a lawyer and political commentator based in Nairobi, said the biometric technology kits the electoral agency relied on in 2017 failed from start to finish.

'The last election, there was a massive failure of many of the kits, many of them did not bring up the voters' details on time, or when the time came to transmit results, many of them failed,' she said. 'They were not able to get the network to send in the results.'

Mdivo attended two IEBC assimilation exercises in June and July, and explained how the integrated election management system differs from the 2017 system.

'The voter details now doesn't just take the thumbprints,' she said. 'It takes all 10 fingers so your fingerprints capture all of them and it takes facial recognition pictures of you, as well. So those who do not have hands or fingers [and] are not able to pull up their biometrics can be identified by inserting their ID numbers and facial. The picture captured during the registration will be brought up, so you are able to verify that this is the voter ... but over and above that, every ... kit now is fitted with a satellite modem such that if our regular providers fail, they can use satellite to transmit.'

The electoral commission says the results announced at polling stations will be final. 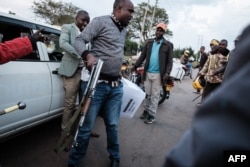 A police officer tries to protect a presidential ballot box near the tallying center in Kilgoris, Kenya, Aug. 8, 2022.

The head of the commission will have to go through all the results before announcing the final presidential results.

Martin Andati, a political analyst, anticipates fewer problems since President Uhuru Kenyatta is not competing in the election. There's less chance of interference since the incumbent is not running.

In 2017, the Supreme Court found no evidence that the president interfered with the election.

In this election, the two main challengers are Raila Odinga, 77, who leads according to recent polls, and 55-year-old William Ruto. Ruto is running for the first time, and Odinga is making his fifth attempt.

Kenyatta supports Odinga for the presidency, but told Kenyans he will hand power to whomever they elect.