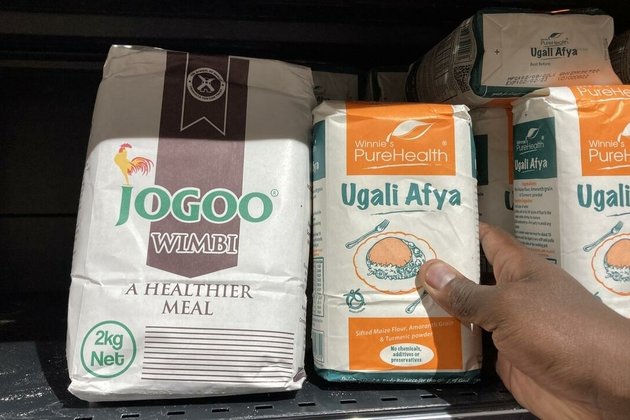 Failed rains over two years, climate change, locust infestation, the Ukraine war and inflation are at the core of food insecurity in both the urban and rural centres of Kenya. The high cost of staple foods has made it difficult for Kenyans to eat their usual three meals a day, and in the arid and semi-arid northern regions many have no food at all.

"For the urban population, the main challenge has been the inability to be able to buy food, but also, the food prices have been out of reach."

In the Embakassi neighbourhood in in the shadow of the Jomo Kenyatta International Airport in Nairobi, the average person who works in the informal sector makes about 3 US dollars per day, according to Pigbin Odimwengu, a food activist, self-styled revolutionary and Embakassi resident.

"If you have children it's very hard. For example, half a liter of milk is now 60 cents and it's the same price for bread. So it means you'll be using $1.20 for breakfast," he says.

"It's totally pathetic and people are just trying to survive. Sometimes you hit the wall and you don't know what to do next."

While Kenyans normally eat three meal a day, Oxfam's Kitui says that with inflation their purchasing power has eroded and the cost of food risen. There is also a scarcity of pulses and cereals, such as maize flour to make the Kenyan staple, ugali.

"In urban centers, some families are only having two meals, or even one meal. You wake up in the morning and you go out, and you come back in the evening and hopefully you have something to eat."

Kitui says that most of the food provided to the urban areas like Nairobi come from the surrounding agricultural area. The capital relies on Kiambu and Lakipia counties for food. But the rains hit the suburban green areas as well.

Maize porridge, or ugali, a Kenyan staple made from maize flour, is a part of daily meals. But after inflation in rose to 7.9 percent in June, and prices for items like maize flour rose 15.3 percent, creating problems for ordinary households.

"During the 2017 election, the cost of maize flour was 90 Kenyan shillings or 90 US cents," says activist Odimwengu, who also tried to run for president. He blames the government for not creating subsidies to help the people.

In June, after pressure from many as well as a food price protest on the streets of Nairobi organized by Odimwengu and other food security activists, the government temporarily lowered the 2kg maize flour price from 230 Kenyan shillings (1.88 euros) to 100Ks (82 euro cents).

Some analysts maintained that the government-supplied temporary subsidy to millers was seen as a political ploy by the Kenyatta administration just weeks before the national elections on 9 August.

Households that cannot afford to buy maize flour go to posho mills, small mills in their neighbourhood that will grind grains into flour for a cheaper price than the supermarkets.

"Three months ago, the flour was a bit cheaper. Right now the price has risen. Three months ago, it was 55 bob (55Ks). Now we are selling it at 85 bob," says miller Joseph Nduku, who works at Ongata Millers in Ongata Rongai outside Nairobi.

Nduku sells corn and pulses to be milled or others bring their own corn, like Deocretius Mohando, who owns a salon and shop in the neighborhood.

"I'm here because of the high cost of unga, or maize flour. I have a farm, so I harvested my maize there and I'm milling it. It's my maize, I didn't buy it, because the prices are a bit high," he says.

He mills his maize in increments of 6kg for his family of seven, because he mixes the maize flour with millet, sorghum, and cassava to make the ugali last longer. He says his family only eats it for dinner.

"This will last me two to three weeks, because if it stands for stands for a while, it will taste sour."

Thirteen-year-old Bilhabishish Akoth came in to Ongata millers with her brother to buy and mill maize flour for herself and her six brothers.

"Yesterday we were in the supermarket but we didn't find any flour. That is because the government has decided to bring down the cost of flour," she says, adding, "We are forced to come here. I'm going to get 2kgs, which will last two weeks because we don't eat it every day."

Farmers caught in the middle

Miller Nduku says that all of their maize supplies currently come from Tanzania.

However, the breadbasket of the county, the Rift Valley, has maize in their shops, according to Oxfam Country Director Kitui.

"They haven't been able to sell, and it's been eaten by pests, but the prices are out of reach," he says.

"Rift Valley harvested a lot of maize but there were very low prices. The government usually offtakes it and puts it in their stores for hard times, but the government did not buy a lot of that maize this time," says Kitui, adding that this was in part due to not enough allocation in the government budget.

He says there's a political element as well to the maize situation, as some, including politicians, benefit from tenders of supplying maize to government stores or relief organizations, so they go outside the country to buy maize.

"It's kind of a precipitated hunger crisis too, to facilitate those who want to sell maize and import maize into the country, despite having plenty," Kitui adds.

In Tanzania, it is reportedly cheaper to grow maize, because farmers there are not as reliant on expensive fertilisers as Kenyan farmers says Kitui.

"So there's always an incentive to undermine the Kenyan farmer instead of paying him a fair price," he says.

Brink of famine in the north

The culmination of the drought due to lack of rains is the worst in 40 years, according to the United Nations.

More than four million people are food insecure in Kenya alone, while the Horn of Africa has 80 million people facing food security and millions already starving, according to Ibrahima Soce Fall, WHO Assistant Director General for Emergencies Response.

"In rural areas, we've had teams go to Turkana, Marsabit. In some of the worst affected areas, people don't even have food to eat. So you don't think 'I'll have one proper meal a day or two,' you eat when the food is available," says Oxfam's Kitui.

Oxfam has been working with local partners to give cash transfers of 8,000Ks (65 euros) to families to buy food, which has stimulated the local markets as well.

But more can be done, specifically by the government, through their INUA Jamii social protection program that targets mainly elderly persons, people living with disabilities, vulnerable and children, with cash transfers, says Kitui.

"It doesn't give enough, but if that program was scaled up, hopefully we can meet the needs of 2 million Kenyans who are currently food insecure mainly in the northern parts of the country, the arid and semi-arid areas," he says.

The government and its partners must work with farmers, especially smallholder farmers, as well as pastoralists, in order to combat food insecurity, says Kitui, noting that the solution is not industrial farming, but looking at what their neighbours are doing.

"For countries that are food secure like Uganda, it's not down to industrialised, heavy chemical and pesticides and herbicides use, it's because of the smallholder agriculture, people doing mixed cropping, having a wide range of crops," he says.

If one crop fails, the farmer has others to tend to, instead of a zero harvest.

"Both to agricultural communities and pastoralist communities who need to recognize that those lands need to be rehabilitated to soak up the rains," he says.

"And the more we have vegetation, the more we can capture the water and the hydrological cycle is repaired."

But in the short term, funding is needed immediately, with famine at the door, especially as the next rainy season is predicted to fail.

While western donors have given more than 1.7 billion euros in response to the Ukraine war, which was received in a short period of time, the smaller appeal for the drought in Kenya was only 17 percent funded.

"Of course, when it comes to things like the drought, there's always donor fatigue. Then Ukraine happens and all of a sudden, no donor fatigue. Oxfam has been very explicit that that's just blatant racism from the wealthy nations," says Kitui.

He stresses that what is happening in Ukraine is "abhorrent" and saving their lives is equally important, but should not come at the expense of saving lives elsewhere.

"It's not suddenly the lack of resources or investment or knowledge, it's just the way the world works in a very racist way," he says.

"And we really have to call that out because it also show the drivers of inequality that have driven the world to where it is now, the exploitation of Africa as a continent."

Kenyans both in the urban and rural areas are struggling to put food on the table due to a number of factors, but this problem is not going to go away immediately. The mindset for food needs to be changed.

"It should be our collective shame if anyone dies of hunger. We have enough food in the world to feed everyone and enough resources to save lives, so let's rethink agriculture. I think there are better ways," says Kitui.