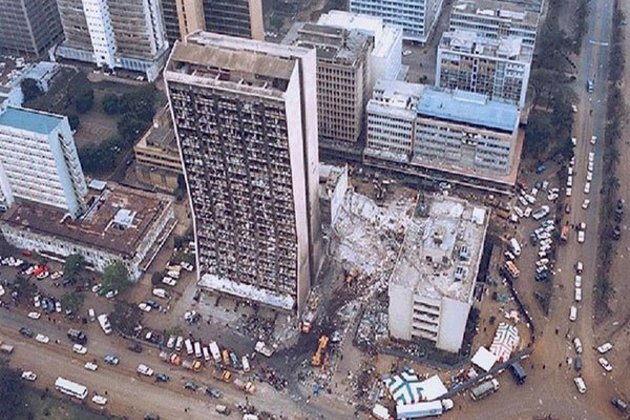 Zawahiri's killing shows US' resolve to act against terrorism: Blinken on 24th anniversary of 1998 US embassy bombings

Washington [US], August 8 (ANI): On the 24th Anniversary of the 1998 bombings of US Embassies in East Africa, US said that it has taken decisive action against al Qaeda leader Ayman al-Zawahiri, an architect of the 1998 attacks, and made it clear once again that the country is determined to act against terrorism.

On August 7, 1998, nearly simultaneous bombs blew up in front of the American embassies in Nairobi, Kenya, and Dar es Salaam, Tanzania, in Africa.

"In the aftermath of these heinous attacks, America and our partners met cowardice and depravity with courage and determination. The attacks, designed to intimidate us, only reinforced our resolve. And earlier this month, America took decisive action against al Qaeda leader Ayman al-Zawahiri, an architect of the 1998 attacks, making clear once again that we are positioned to act on our determination, which does not wane with time," a State Department Press release said.

Al Qeaeda chief Ayman al Zawahiri was killed on August 1 in a drone strike carried out by the US on a residential house in the Sherpoor area of Kabul city.

Two hundred and twenty-four people died in the blasts, including 12 Americans, and more than 4,500 people were wounded, as per the figures by Federal Investigation Bureau.

In the aftermath of the attacks, over 900 FBI agents alone--and many more FBI employees--traveled overseas to assist in the recovery of evidence and the identification of victims at the bomb sites and to track down the perpetrators.

These attacks were soon directly linked to al Qaeda.

Efforts from international partners led to the identification, arrest, and extradition to the United States of several members of the al Qaeda terrorist network for their role in the bombings.

Mohammed Sadeek Odeh and Mohammed Rashed Daoud al-Owhali were arrested in Kenya within 20 days of the bombings and rendered to the U.S. shortly thereafter. Both were convicted for their roles in the bombing and sentenced to life in prison in October 2001.

In September 1998, Mamdouh Mahmud Salim was arrested in Germany. He is currently serving a life sentence for stabbing a federal corrections officer in the eye while in prison after being charged in the embassy attacks. Also Wadih el-Hage--a naturalized American citizen who had been living in Arlington, Texas--was arrested by the FBI for making false statements during questioning. After being indicted for his role in the bombings, he was convicted and sentenced to life in prison in 2001.

On November 4, 1998, Osama Bin Laden and several members of his network, including his military commander Muhammad Atef, were named in an indictment based on the investigation. Both have since been killed.

US remembers the lives -- Americans, Kenyans, Tanzanians, and others -- that were violently taken 24 years ago. "The victims of these attacks are never far from our minds, and today our thoughts are also with the loved ones they left behind," Blinken said.

"Today in South Africa and in the coming days from the region, I will reiterate to our African partners that America remains determined to work with countries of the continent to confront the shared challenges we face, including the scourge of terrorism and violent extremism. As we remember the lives taken from us nearly a quarter century ago, we will continue to demonstrate that those who seek to stand in the way of a better future for our countries will never be able to succeed," he added.

In the immediate aftermath, Diplomatic Security Service (DSS) sent 41 special agents, four security engineering officers, and 41 Navy Seabees to the two embassies to assist local staff and begin investigating the attacks. DSS also increased security at other posts that could be targeted by al-Qa'ida.

The East Africa bombings affected attitudes throughout the State Department, with a heightened sense of security awareness. DSS regional security officers were granted increased authority and responsibility, for the first time reporting directly to ambassadors or chiefs of mission. (ANI)