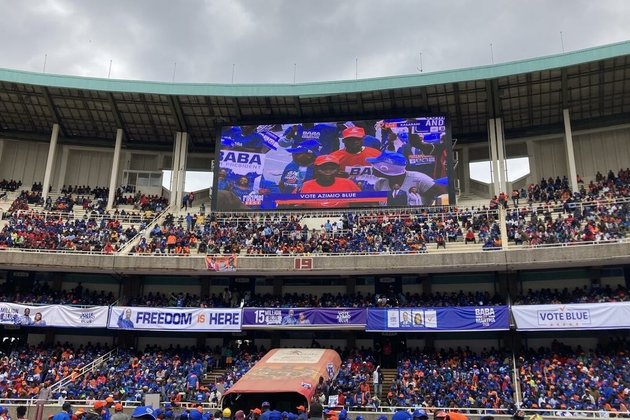 Kenya: presidential candidates wrap up their campaigns before vote

Supporters wore their candidate's colours for the last time on Saturday for the final rallies of the two frontrunners, Raila Odinga and William Ruto, in Kenya's presidential election on Tuesday. Polls show that it will be a tight race between the two contenders.

"We must embrace reconciliation. We cannot get to Caanan as a divided nation: that is, half bitter, and half happy. In my government, there will be no revenge," he said.

Odinga referred to his famous handshake with former arch-rival President Uhuru Kenyatta, which sealed the deal and his place on the podium at Kaserani Stadium today as a presidential candidate.

"I shook the hand of Mzee Daniel Torotich arap Moi in March 2002, and President Mwai Kibaki in 2008, and my brother, President Uhuru Kenyatta, in March 2018," he said, to wild cheers from the crowd.

"I will continue this handshake doctrine, the doctrine of unclenching the fist, for the sake of Kenya."

He paid tribute to Kenyatta for showing statesmanship during his tenure, and pledged to accept the results.

He ended on a high note, proclaiming, "Let us vote early, let us win early!"

Speaking to Odinga's supporters who came for the final campaign rally, many cited his policies that would help the poor and the vulnerable.

The challenges ahead as Kenyans prepare to choose a president

For Adimo Eurance, who came to cheer his candidate Baba (Father in Kiswahili) Raila Odinga in a suit full of stickers, including his shoes, he wants to avoid the post-election violence from previous times.

"We want the 6000 shillings (49 euros) for youths that Odinga has promised," sais Bram Omondi, 22, walking into the stadium.

"Baba is better and can give you something you need. You will be able to pay your rent," he says.

Entrepreneur Frederick Onyango took Odinga's promises one step further, selling stickers of 6000 shillings, a denomination that does not exist, with Odinga's face on them.

When asked why he was voting for Odinga, he responded, "why are you asking me?" while holding up his 6000 shilling note sticker.

The old mixed with the young, and even Maina Mukiri, who says he's between 60 to 70 years old, came from Muranga County to see Odinga at the final leg of the campaign.

"He's a cool person and I think he'll do well," says Mukiri, who is also the local chair of Raila's Orange Democratic Movement (ODM) party.

Deputy President William Ruto entered Nyayo stadium standing on the back of a truck, doing a pre-victory lap to the glee of his supporters.

He spoke to his supporters Nyayo Stadium, which holds some 30,000 people, but was roughly only three-quarters full.

Sporting a white shirt with five embroidered bars that represent the various political parties who backed him, the current Deputy President spoke in both English and Kiswahili, speaking in defense of Kenya's constitution.

He spoke on corruption, a key point of his Kenya Kwanza alliance.

"It is obvious, it is clear, that we can see the horizon, that this election is done. That the people of Kenya have finally made a decision not to go backwards, but to go forwards," he said.

Ruto said that he would accept the results of the election whatever the outcome.

"We will accept the decision of the people of Kenya, because we are democrats," he said.

This was a key point for Janet Munyesi, wearing a patterned white headscarf and holding a Ruto sign at the final rally. She said that Ruto "loves people like me, and I will feel represented and safe."

"I brought him here today because every time Steven sees Ruto on tv he cheers for him. He loves him," he says.

On the back of Omondi's overalls was embroidered 'hustler', in a nod to Ruto's persona. On the back of Steven's was 'Ruto help me'.

"I had to pull him out of school because I couldn't afford the school fees," says Omondi, who works at a supermarket lifting bags for customers. He's hoping voting for Ruto will help his son go to school again.

After 6PM Saturday, supporters will put away their political t-shirts and not wear party colours, an edict from the Independent Electoral and Boundaries Commission (IEBC).

Voters will go to one of the 46,000 polling stations throughout the country on Tuesday to pick their next president. Polls open at 6AM and close at 6PM.